By Paul JJ Payack
About the Series

By delivering its lessons in informal, brief and easy-to-digest sections, Ten Tips for Mastering Global English can serve as an entry-point to in depth study of the subject.

The author, Paul JJ Payack, is the founding president of both yourDictionary.com and the Global Language Monitor. He is the author of some seventeen books as well as hundreds of articles on Global English, Marketing and High Technology, as well as science fiction, drama, and the like.
Educated at Harvard and Bucknell Universities in the US, his latest work is A Million Words and Counting, about the growth and nature of the Global English and the impact it is having on various aspects of culture, as well as the impact of culture on the language itself.

At the Global Language Monitor, we look at English as Global English. Rather than focusing on geography (British English, American English, Indian English, we focus on usage—how English is spoken today, by the world’s scientists and technologists, the youth, in the boardrooms of multi-national corporations, in the world of entertainment, and the like.

We’ve also come to realize that there are several momentous trends that are occurring in  Global English right now: 1) A vocabulary explosion: the number of everyday words we use to communicate — those recorded in dictionaries, in newspapers, in  blogs and on the internet, in correspondence to our loved ones, in classroom assignments, in paying our bills, and in recording our history — is expanding at an unprecedented rate, the total just over a million  words, and 2) A geographic explosion: the English language, which at the time of Shakespeare was spoken in a narrow band in the south of Britain by  only a few million people, has suddenly, and rather unexpectedly, become the language of global discourse, commerce, science, entertainment, and communications,  with  speakers  now  approximating 1.58 billion people.

As an intense observer of the English language, nothing could make me more pleased. And I’m thrilled to be a continuing witness to its evolution, watching and anticipating the countless new ways it will impact the lives of billions around the globe for decades (and even centuries) to come.

Never before in the history of the planet has a single language held as dominant a position as English does today.   Some 1,580,000,000 people can now read this sentence in its original language. Think about that for a minute.

Dispatch From the Front Lines (9/11 Illustrated)

I created these thirteen collages two nights ago in the early hours of the morning in the very heart of the District of Columbia, a few blocks from the White House.

The previous evening had taken on all the attributes of a deathly beautiful, moonlit autumn evening, with a warm and gentle breeze from the Southwest, and all the splendor this Capitol City is capable of displaying, from the commanding presence of the Capitol Dome to the silent testimony of the Washington Obelisk bolding piercing into and through the dark.

But all this beauty belied the all-persuasive tension, like a hitherto unknown and yet-to-be-discovered form of gravity gently pulling on one’s heart.  (I await some post-Modern Isaac Newton or Albert Einstein to establish the attendant theoretical and mathematical constructs.)

For this was, and is, and remains a city under siege.  Under siege by an invisible enemy which could (and can) be found anywhere, elsewhere or nowhere.  As my wife opined, it was one of the most protected areas on the planet, and undoubtedly this was true, but, of course it gained that distinction because it also one of the most dangerous places on the planet and perhaps the most highly targeted of targets set squarely in the night scopes of the stealthily silent invaders.

Since the events of September 11th, I have attempted to somehow encapsulate something that cannot readily be captured, at least from the perspective of days and weeks.  As with all things human, a distance and perspective of a generation or two … 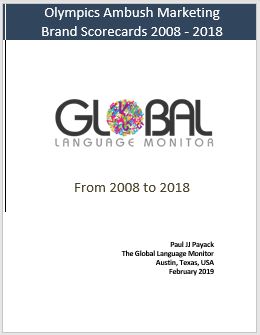 In these pages, you will read about and better understand the fierce behind-the-scenes warfare that the Global Language Monitor has been tracking for six Olympiads now.

And don’t for a minute think that these battles are being waged in any way but the most sophisticated strategies, tactics, and algorithms.

GLM has been tracking PyeongChang for three years now, and are already deep into our analysis of the Tokyo and even the Beijing Games.  Paris isn’t far behind.

You can read the document in a ‘You Are There’ manner since we present each of the Games in the way they actually unfolded.

We hope this all will help you have an even more enjoyable experience since you are now entering the stealth world of Olympic Ambush Marketing.

Organizations pay tens of thousands of dollars per month for this type of research, but we are offering this to you for $499.00, providing you with a convenient entry-point to subscribe to our service.

Limited edition, signed by the author with a personal inscription.  The seminal work of Paul JJ Payack, and an early example of both ‘metafiction’  and ‘flash fiction’.  His first book of short, short fiction, parables, epigrams, and polyphonic prose (now called flash fiction).
“… the brief, almost bald, summation of crucial experience that attains its power through its very stark reductiveness”  -Sylvia L.Berkman

Written in 1973 off Oxford Street in Cambridge,  Mass., just up the street from where Paul Allen and Bill Gates were creating what came to be known as MS_DOS.