England Once Accounted for a Majority of English-language Neologisms.

Excerpt from the Report

AUSTIN, TEXAS, UNITED STATES, August 16, 2021 — The Sun might have set on the British Empire but the language continues to expand its global dominance though with fewer contributions from the ‘Sceptre’d Isle’.  This is according to a new study to be released later this fall, by the Global Language Monitor.

English has been hailed as the first truly global language inserting itself into nearly every nook and cranny of modern life, thanks to its conquest of science, technology, education, film, fashion, and communications.

According to GLM, a new word is created every 98 minutes, about 14.7 words a day or 5400 words a year.  As of today, GLM’s estimated number of words number is 1,066,095.9 words.   Google’s Ngram word count of millions of English-language books also lists a similar number of words.  According to a study with Harvard University, the count was 1,022,000 English-language words in 2010, within 1.6% of GLM’s estimate at the time.  The study estimated about 8,000 neologisms/year joining the language, while GLM’s analysis put the number at 5400.  Nevertheless, it is a large and growing language.

One problem with the UK maintaining proper ownership (and dominance) of the language it begot) is that it is becoming a smaller and smaller portion of the English-speaking world.

Today, tens of thousands of English-language neologisms bubble up from all corners of the planet each year, but only about 5,000 to 8,000 have enough staying power to make into any of the standard dictionaries, e.g., the Oxford English Dictionary (OED), Collins, Macmillan, Webster’s Unabridged, American Heritage Dictionary, Macquarie Dictionary, among others.

The Global Language Monitor has three distinct criteria that each new word must meet to be included in the English-language corpus, which GLM refers to as ‘depth’ and ‘breadth’.

According to the latest available statistics, the UK now stands in sixth place on the list of English-speaking countries, as shown below.  Nevertheless, the list below does raise some interesting questions, for example, the UK is No.6?  The U.S., of course, reigns in the top spot, and perhaps, India is in a well-deserved second place, but Pakistan, Nigeria, and the Philippines at Nos. 3-5?

[Note:  due to variations in statistical methods, some totals can appear slightly out of sequence.] 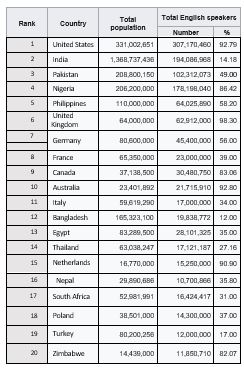 If you are looking at this list from the perspective of a champion of the former British Empire, you can think about this in two ways:

As shown below, Modern English, itself, is an amalgam of dozen or more Proto-Indo-European-Languages, END_OF_DOCUMENT_TOKEN_TO_BE_REPLACED