WARNING:   This was published in early February as a worst-case scenario.  The intent was to alert the world of the on-coming catastrophe.

The idea was to take the numbers from the Hong Kong Institute of Science and Technology as published in the  journal, Lancet, and to simply extrapolate them forward — if the coronavirus was left unchecked by any human intervention.

GLM PUBLISHED THIS ARTICLE IN EARLY FEBRUARY WHEN THE EMERGING PANDEMIC WAS LARGELY IGNORED BY THE MEDIA, ACADEMIA AND THE ADMINISTRATION

Please be discreet when distributing.

We are publishing this article only to show the extent of the spread of the virus IF LEFT UNCHECKED. All recent potential pandemics (including Ebola, SARS, and MERS) were stopped due to deliberate action taken by the worldwide medical community (especially the WHO, the CDC, NHC, etc.,) and the proper precautions directed by the relevant government bodies and heroic NGOs.

Overview: The news from China is not good. Most recently The South China Morning Post detailed,

“Measures unveiled by the authorities in Beijing and Shanghai on Monday include stricter controls on the movement of residents and vehicles, compulsory mask-wearing and shutting down leisure and other non-essential community services … Beijing Daily reported on Monday that the capital, with a population of over 20 million, would step up efforts to further restrict access to residential communities and compounds and introduce a citywide registration system for entries into Beijing.

In addition, “Officials at the epidemic control and prevention centre in Shanghai said on Monday that “the vast majority” of the city’s 13,000 residential communities and compounds had instituted “lockdown management”, including entry restrictions and mandatory temperature checks.”

According to the New York Times, “on Thursday, officials added more than 14,840 new cases to the tally of the infected in Hubei Province alone, bringing the total number to 48,206, the largest one-day increase so far recorded. The death toll in the province rose to 1,310, including 242 new deaths.

“The sharp rise in reported cases illustrates how hard it has been for scientists to grasp the extent and severity of the coronavirus outbreak in China, particularly inside the epicenter, where thousands of sick people remain untested for the illness.”

Furthermore, some investigators have suggested that the number of new cases was leveling off and will, in fact, peak and level off in the next few weeks. One study actually picked a date (February 23); mark your calendar.

The COVID-19 Calendar is based on the data provided by the British medical journal The Lancet working with data supplied to them by the Hong Kong University of Science and Technology (HKUST), and the National Health Commission (NHC) of China, among others. The Global Language Monitor is not responsible for any of the data — only with the extrapolation of the data.

Note: Tip of the Ice Berg? These extrapolations in themselves are hypothetical and should be taken as such. These numbers assume that the number of infections has been substantially under-reported, due to a number of factors.

This data was gathered with an abundance of caution after studying the various numbers coming out of Wuhan. The projected numbers are published herein because these results have been assiduously avoided in the media in all forms. 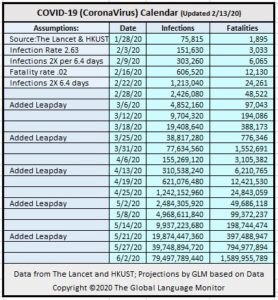 Obviously, COVID-19 cannot expand indefinitely as in the extrapolation above. Typically, these pandemics either burn themselves out or a halted through Human intervention. The gravest predictions now top out at a 60% infection rate for the entire Human population. Rest assured, that this has never happened in all recorded history.

Origin of Graphics, The Lancet

This ThoughtTopper Institute publication was compiled by Paul JJ Payack, President and Chief Word Analyst of the Global Language Monitor.