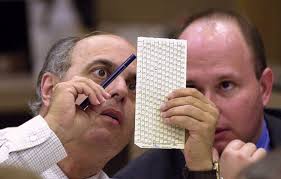 Egad! What’s the ‘chad’ blocking the path to the White House?

ATLANTA, Georgia (CNN) — The final answer to who’s going to be the next U.S. president may be determined by “chad.”

A) A country in Africa?

D) A lowly scrap of paper that may decide who will be the next leader of the free world?

All four answers are correct. Chad is also the name of a couple of major league baseball players and one half of a British pop-singing duo from the ’60s.

But if you guessed “D,” you are informed enough to understand the vote counting process in Florida.

Politicians are tossing the term “chad” around as if everyone were familiar with the word. Democratic presidential candidate Al Gore’s campaign adviser, George Mitchell, is among them.

“You can run those machine ballots through five times and you’ll get five different totals because the chads fall off with each count,” he said, explaining on “Fox News Sunday” the reason he believes ballots in Florida should be recounted by hand.

But Mitchell’s use of “chads” betrayed his own lack of familiarity with the word. “Chad is its own plural,” said Paul J.J. Payack, president and CEO of yourdictionary.com, which is based in California.

The Web site www.yourdictionary.com defines the word as follows:

“Chad” would then be a back-formation from “Chadless” misunderstood: If the Chadless keypunches don’t produce it, other keypunches must produce “chad.”

The word appears to have entered the national lexicon in the late 1940s, around the time people began to refer to “bug” as a computer glitch after a researcher blamed a moth among a group of vacuum tubes for affecting ENIAC, the primitive computer powered by thousands of such tubes, said Payack. That was also about the time when IBM began using punch cards that warned users not to fold, spindle or mutilate.

In Florida, vote-counters may have wished for a “chadometer” to measure whether a bit of chad is sufficiently dislodged to qualify it as “dangling.”

When the hand recount began in Palm Beach County, the canvassing board there said it would count a vote if any of the corners of the chad were punched.

The board then decided that they would instead use the “sunlight test” — if they could see sun through an indentation, it would count.

About a quarter of the way through the counting, however, a board member determined that the light test was flawed and told the other members to go back to the first test.

According to county spokesman Bob Nichols, there are five types of chad.

Chads that don’t count:
• Pregnant — bulges, but not punched through
• Dimple — simple indentation