The Seventh Annual Analysis by the Global Language Monitor

“All Things New York”, capturing the essence of the New York fashion sense, dominates the 2014 Top Fashion Buzzword list,” said Rebecca Roman, Manhattan-based Fashion Director for GLM. “It is difficult to think of any global fashion trend that does not have a strong presence, if not its origin,  in the New York City. 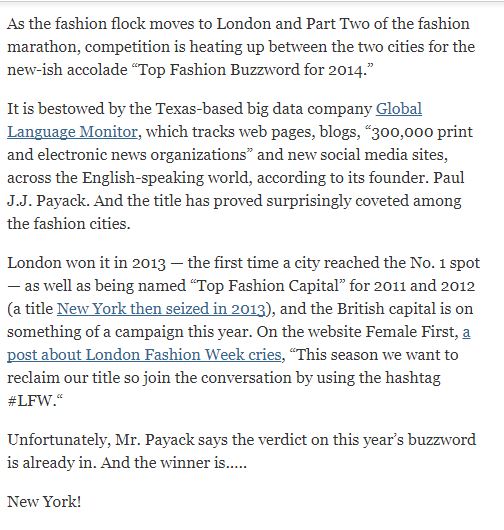 Methodology:  GLM’s various word analyses are longitudinal in nature covering a number of years that varies with the particular analysis.  The rankings are based upon actual word usage throughout the English-speaking world, which now numbers more than 1.83 billion people.  GLM analyses billions of web pages, millions of blogs, 300,000 print and electronic news organizations, and new social media sites as they emerge.  To qualify for GLM’s lists, the words, names, and phrases must be found globally, have a minimum of 25,000 citations. and the requisite ‘depth’ and ‘breadth’ of usage.  Depth is here defined as appearing in various forms of media; breadth that they must appear world-over, not limited to a particular profession or social group or geography.