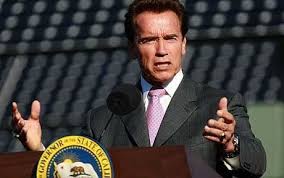 LOS ANGELES (Reuters) - He may mispronounce “California” and his plans for the state have been slammed as a series of “one-liners”. But even critics concede that Arnold Schwarzenegger is an effective communicator on the campaign trail.

In a page lifted from the playbook of his idol Ronald Reagan, another actor turned politician, the Austrian-born Schwarzenegger may not say much, but he says it well and often in the same way — except when he gets into a tangle over past remarks.

As far as accents go, the experts say count his as endearingly Central European. He is no “Dr. Strangelove” as Henry Kissinger was once perceived. And like a lot of politicians, Schwarzenegger seems to have a love affair with the ninth letter of the alphabet. He frequently begins sentences with “I shall”, “I will”, and “I am proud”.

But where he gets into trouble, and where his wife had to put her hand over his month the other day on the Oprah show, is when he talks about women and sex as he has publicly since bursting onto the scene as a bodybuilder extraordinaire in the 1970s.

With the recall election heading into an October homestretch — courts permitting — Schwarzenegger has emerged as a polished political performer along the lines of Reagan, according to Paul J.J. Payack, president of the language monitoring Web site YourDictionary.com.

Payack says that the public is finding Schwarzenegger’s accent endearing. “He is both the ’Kindergarten Cop’ and ’The Terminator’. He is endearing. He is a total package and is very astute at putting himself together.” Payack told Reuters.

“With Arnold, people see his accent as friendly and familiar not frightening as in ’Dr Strangelove’. His is not a gravely, mumbly Kissinger accent,” Payack said, adding:

“He is a bright guy. He has a plan and he has been executing it. He is well-scripted and he follows the example of Ronald Reagan of ’You don’t have to say a lot but you have to say it well.’”

While avoiding debates with his opponents, Schwarzenegger has been a frequent guest on friendly celebrity talk shows — doing, for example, both the Howard Stern radio programme and Larry King’s TV show in the same day where his comments on one show were pretty much the same as the other.

On these programs and on Oprah, he has been defending himself against charges of sexism that stemmed from both a 1977 interview he gave to a men’s magazine and to other comments about women he made over the years, including an article in Esquire last July about the latest “Terminator” movie:

“When you see a blonde with great tits and a great ass, you say to yourself, hey, she must be stupid or must have nothing else to offer…. But then again there is the one that is as smart as her breasts look, great as her face looks, beautiful as her whole body looks gorgeous, you know, so people are shocked.”

This comment and another one he made about the pleasure he had in sticking his female co-star’s head in a toilet in one scene led him to a strained explanation the other at a campaign appearance:

“In ’Terminator’ we had this unbelievable fight scene, me against a female terminator and what was great about it was because we could do things, because we were two machines.

“We could hit each other. We were trying to destroy each other, me picking her up upside down and stuffing her down the toilet. She wasn’t a woman. Because she was a machine. That’s what I was trying to explain. Do you get it? It has nothing to do with women or anti-women. I love women. Trust me.”

Maybe Ronald Reagan wouldn’t say it in exactly that way.