Words of the Pandemic Again Dominate the only list for English Worldwide.

AUSTIN, TX, UNITED STATES, November 11 - 13, 2022   — For the third consecutive year, words of the pandemic dominate the conversation in Global English,

According to Paul JJ Payack, President and Chief Word Analyst of the Global Language Monitor:

In the year 2022; we observed three major trends in the development of the English language: 1) The persistence of Pandemic-related words for the third year in a row, 2) the acceleration of the spread of the language ever wider into all corners of the planet, and 3) Global English insinuating itself ever more deeply into the language of academia, science, technology, politics, commerce, transportation, and entertainment.

Top Words of Global English for 2022 by The Global Language Monitor follow.

Rank / Word or Phrase / Comments.
1. Denier — Concept encompasses ‘Hater,’ ‘Cancel Culture,’ and the ‘Deniers’ of an ever-expanding list of facts, fallacies, and beliefs.
2. Covid — Covid, one of the Top Words in Global English, again
3. Right to Life — Pro-life position (Compare No. 19)
4. Ukraine — Top non-Pandemic word in 2022
5. Zero — In Retail, ‘zero’ used to mean ‘nothing’, but now embodies ‘goodness,’ ‘health,’ and ‘beauty’.
6. Price of gas/petrol — Gasoline prices up 49% year over year.
7. Vaccine — No. 2 word of the Pandemic
8. Variant — Variant after variant after variant
9. Climate change — One of the top phrases of the CENTURY thus far
10. Pandemic — Pandemics tend to last for a number of years (or decades)
11. Supply Chain — Supply chains take decades to set up but can quickly crumble
12. Booster Dose — Boosted, double boosted, triple boosted …
13. Diesel — Warning: Civilization does not run on gasoline; it runs on diesel
14. Cancel Culture — Forced to quit by intense social media pressure
15. Inflation Definition — Too much money chasing too few goods
16. Global Warming — Again, one of the top ten words of the century
17. Democracy — 600% stronger than ‘Democracy at Risk’
18. Omicron — Coronavirus Omicron variant; the first of many to come
19. Abortion Rights — A relatively modest position on the list (No. 3, ‘Right to life’ is 400% stronger)
20. Donald Trump — After years of sparing Joe and the Donald still neck-and-neck 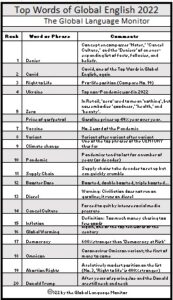 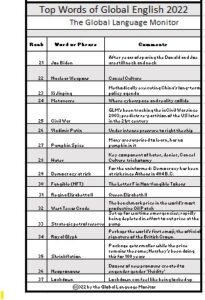 21. Joe Biden — After years of sparing the Donald and Joe are still neck and neck
22. Nuclear Weapons — War in Ukraine once again brings issue to the forefront
23. Xi Jinping — Methodically executing China’s long-term policy agenda
24. Metaverse — Where cyberspace and reality collide
25. Civil War — GLM’s been tracking the inCivil War since 2003; predicts re-partition of the US later in the 21st century
26. Vladimir Putin — Under intense pressure to right the ship
27. Pumpkin Spice — Many are surprised to learn, has no pumpkin in it
28. Hater — Key component of hater, denier, Cancel Culture trichotomy
29. Democracy at risk — For the uninformed: Democracy has been at risk since Athens in 404 B.C.
30. Fungible (NFT) — The Letter F in Non-fungible Tokens
31. Regina Elisabetta II — Queen Elisabeth II
32. West Texas Crude — The benchmark price in the world’s most productive Oil Patch
33. Strategic petrol reserve — Set up for wartime emergencies; rapidly being depleted in effort to cut price at the pump
34. Royal Glyph — Perhaps the world’s first emoji; the official signature of the British Crown
35. Shrinkflation — Package gets smaller while the price remains the same; Hershey’s been doing this for 100 years
36. Neopronouns* — Dozens of new pronouns created to engender gender ‘fluidity’
37. Lockdown — Lockdown can feel like being locked up

English has continued to churn out about 14.7 neologisms per day — about 5366 words a year. However not all words are considered worthy to be added to the most authoritative and respected English-language dictionaries, the unabridged and various editions of: the Oxford English Dictionary (UK), Merriam Websters (US), American Heritage (US), Collins (UK), and Macquarie (AUS).

Global Language Monitor began recording the Top Words of the year in 2000 to document the history of the 21st Century through the English language, the world’s first truly global language. The words are culled throughout the English-speaking world, which as of January 2021 ranks more than 3.18 billion speakers.

Based in Austin, Texas, the Global Language Monitor collectively documents, analyzes, and tracks trends in Global English, the world’s first truly global language The company is known for its Word of the Year, political analysis, college and university rankings, high-tech buzzwords, and media analytics. For more information, visit Languagemonitor.com.