The usual key to staying on top in the murky world of politics is to control the narrative. And, by all linguistic accounts, Barack Obama’s control of the oil spill narrative has slipped away. 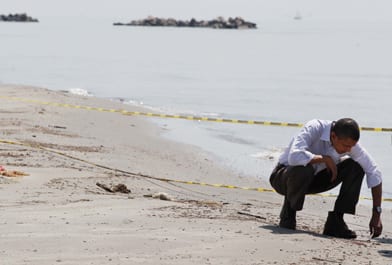 In his first prime-time address from the Oval Office recently, Obama attempted to take back the reins by employing warrior-like language.

In his best Churchill impression, he spoke about “the battle we’re waging against an oil spill that is assaulting our shores and our citizens,” going on to vow that “we will fight this spill with everything we’ve got for as long as it takes.”

The president then talked about creating a battle plan as well as the need to develop energy independence and to “fight for the America we want for our children.”

The president then talked about creating a battle plan as well as the need to develop energy independence and to “fight for the America we want for our children.”

Accused of not being angry enough at the company that has still not managed to fully plug a gushing oil well, “No Drama” Obama, as he was once known, is using tougher language and framing the oil spill as an environmental 9/11.

He also uttered the now oft-quoted explanation of why he’s spending so much time talking to experts: So he can “know whose ass to kick.”

But in this unfolding drama, with a wavering protagonist, a motley crew of characters and a slick, unrelenting enemy, one is compelled to shout in frustration: “Words, words, words!”

BP: Drill relief wells, this is going to take awhile.

Political narrative: Drill home the need for relief/compensation (this is going to take awhile)

Therein lies the problem, says language analyst Paul Payack. Words alone mean nothing if they are not backed up by action and, as a result, Obama has lost control of what he wants to say.

“He who wins control of the narrative controls the story in terms of political capital,” says Payack. And at the moment, Obama isn’t doing so well, which could hurt his party in the November mid-term elections.

According to Payack, the most important storyline currently defining the president is “Obama as oil spill enabler.”