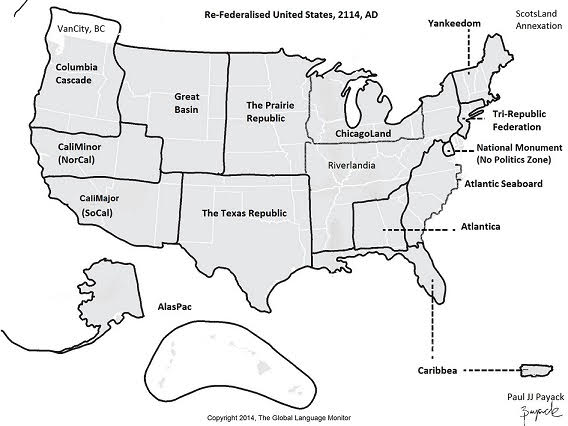 “The first fifteen years of the 20th c. set the trajectory for the remainder of the century — and beyond.”  said Paul JJ Payack, president and Chief Word Analyst, the Global Language Monitor.  “This included the seeds of World War, Bolshevism, Communism, German Nationalism, the carving up of the Middle East without regard to societal structures, total warfare, the introduction of weapons of mass destruction, flight, electrification of rural areas, the internal combustion engine, the dependence on hydrocarbon for fuel, Einstein’s first papers on relativity, the arms race, the explosive growth of cities, and so much more.

If the same can be said for the 21st century at the 15 year mark, what trends can we see that will be likely shape the rest of the 21st century, into the 22nd — and possibly beyond?

The ‘Re-Federalists’ convinced the majority of the US electorate to call a Constitutional Convention after decades of  hat came to be called ‘the Great Gridlock’.

In the aftermath, the US was ‘re-federalised’ into fourteen ‘Federations,’ the former District was made into a politics-free ‘National Monument’. And the federal government moved into the range of Thomas Jefferson’s early estimates (extrapolated from thirty or forty into some 300,000 employees), who were equally divided among the Fourteen Federations.

The new federations were more politically, culturally and economically united, so the so-called “culture wars” of the 21st C. quickly faded away.

Another interesting note:  VanCity and British Columbia, and ScotsLand, of the former United Kingdom were both annexed by the RFUS, without apparent opposition.

This also lit the economic engines of most of the new states, the the US Federation jumped into a sizable lead economically over China, again.  However, China re-captured its lead as the world’s top economy later in the 21st c. and into the 22nd.

Early in the last century, The Global Language Monitor (GLM) was founded in Silicon Valley by Paul J.J. Payack on the understanding that new technologies and techniques were necessary for truly understanding the world of Big Data, as it is now known.  Silicon Valley is located in what is now the CaliMinor Federation.