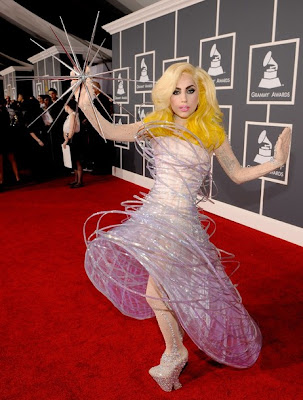 Michelle Obama Falls from No.2 to No. 15

Austin, TX February 2, 2010 – Lady GaGa, the enigmatic yet near ubiquitous performance artist, was declared the Top Fashion Buzzword of the upcoming season by the Global Language Monitor. This is the first time that a name has topped the GLM’s rankings. Immediately following were ‘leggins 2.0,’ ‘no pants,’ ‘off-shoulder,” and ‘chandlier’ as in earrings. Rounding out the Top Ten were the ‘boyfriend’ craze, ‘peek-a-boos,’ ‘camos’ as in camouflage, ‘Hippie Luxe,’ and ‘Armadillo’. Michelle Obama as a fashion icon was reflected in the term ‘Mobama. Mercedes Fashion Week for the fall 2010 collections begins on February 11th in New York City, followed by the shows in the other major fashion capitals: London, Milan, and Paris.

“The relationship between Stefani Germanotta, the girl from Yonkers, and haute couture may not be intuitively obvious, until you realize that Stefani would soon grow into one Lady GaGa,” said Millie L. Payack, director and fashion correspondent of the Global Language Monitor. “The fact remains that the world of fashion has been duly impacted by her in ways some subtle and some rather profound.”

The words were chosen from the global fashion media and nominated by key fashionistas from around the world. This exclusive ranking is based upon GLM’s Predictive Quantities Index, a proprietary algorithm that tracks words and phrases in print and electronic media, on the Internet and throughout the blogosphere, now including social media. The words and phrases are tracked in relation to their frequency, contextual usage and appearance in global media outlets.

1. Lady Gaga — Enigmatic performance artist has had outsized impact on the world of fashion.

2. Leggins 2.0 – Flourishing from Milano to Main Street, leggings are now differentiated as jeggings (jeans + leggings) and meggings (male leggings), and the like.

4. Off-shoulder – One shoulder and Off-the-shoulder asymmetrics are now combined with cutouts, draping, or heritage stylings.

5. Chandeliers — Earrings, that is.

6. Boyfriend (the jacket, jeans etc) – It’s getting to be like an Audrey Hepburn movie out there with boyfriend jackets, jeans and the like.

7. Peek-a-boo – Peek-a-boo fashion is back once again; this time as cutouts.

8. Camos – Camouflage is back, this time with an Urban Jungle vibe.

10. Armadillos – Shaped like a lobster, made of Python, and called Armadillos — the highly controversial sculpted shoe designs of Alexander McQueen.

12. Embellishments – Delicate, all, including ruffles, transparency and tulle.

13. Ethical fashion – Echoes of PETA here. No furs, no armadillos, no leather.

14. Fashion 2.0 — Incorporating streaming techniques that bring designer showcases and shows to the buyers and consumers in real time.

15. MObama – OK, so she wears ‘mom’ jeans, but everyone seems to notice, after all Michelle is The Mobama.

Each July, the Global Language Monitor ranks the Top Fashion Cities of the Year ranked by Internet presence in a global survey. In 2009, Milan upended New York after a five-year reign as the Top Fashion Capital followed by New York, Paris, Rome and London. Other top movers included Hong Kong and Sao Paulo, who broke into the Top 10, while Barcelona and Miami surged. In the ever-tightening battle for the Subcontinent Mumbai outdistanced Delhi, while Sydney further outdistanced Melbourne.