Presence of media favorites, Princess Kate and Alexander McQueen, Tip the Scales away from New York 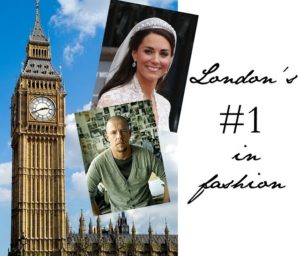 Berlin and Singapore Break into the Top Ten

New Delhi slips farther behind Mumbai as does Melbourne behind Sydney

August 21, 2011 NEW YORK and AUSTIN, Texas.   London has overtaken New York City as the Top Global Fashion Capital for 2011, the Global Language Monitor, announced today.  London and New York were followed by Paris, Milano, Los Angeles, and Hong Kong.  Barcelona, Singapore, Tokyo and Berlin rounded out the top ten.   New York had reclaimed the crown from Milan last year.  Previous to this, New York had been the top fashion capital for five years running.  Berlin and Singapore broke into the Top Ten for the first time.

“We are seeing what the impact of two genuine media stars, Princess Kate and Alexander McQueen can have upon a global ranking.  Our numbers show that it was their presence that tipped the victory to London over New York,” said Bekka Payack, the Manhattan-based fashion correspondent of the Global Language Monitor.  “In the various categories, London took top honors in three, while New York, Paris, and Sao Paulo each topped the field in one.”

The list was expanded to fifty cities to recognize the growth of regional capitals with their distinctive styles and contributions to the fashion industry.  Top Movers on the plus side included Bali (+11), Rome (+9), Berlin (+8), Mexico City (+8), and Singapore (+7).  Top movers on the down side include Cape Town (-23), Prague (-22), and Miami (-19) and Jo-burg (-16), attesting to the heightened competition.

This exclusive ranking is based upon GLM’s Narrative Tracking technology.  NarrativeTracker analyzes the Internet, blogosphere, the 75,000 print and electronic media, as well as new social media sources (such as Twitter).

The words, phrases and concepts are tracked in relation to their frequency, contextual usage and appearance in global media outlets.

This exclusive ranking is based upon GLM’s Narrative Tracking technology.  NarrativeTracker analyzes the Internet, blogosphere, the 75,000 print and electronic media, as well as new social media sources (such as Twitter).   The words, phrases and concepts are tracked in relation to their frequency, contextual usage and appearance in global media outlets.

The Top Global Fashion Capitals for 2011, change from previous ranking, and commentary  follow.

The world ‘rag’ business is estimated to be over three trillion USD.